Once upon a time, long ago there was an insult that kids threw at each other (what we’d call ‘bullying’ today). Kids teased other kids by insulting their mothers with, “Your mother wears combat boots!”

When I arrived in Okinawa in March 1978, WM’s (as we were called) did not wear combat boots.  We referred to our utilities as  ‘blue pajamas’ and we wore spit-shined black oxfords.  At the time there weren’t enough women in the Marine Corps to justify having our own uniform so we wore what the women in the Navy wore.

But I wanted real combat boots!

In Okinawa a supply truck would drive through the base (MCAS Futemna) once a month with uniform items for sale.  I wanted the mens boots sold on the truck even if I couldn’t wear them! While the truck was on it rounds one month I hopped up on the back and picked out a pair trying them on for size since they only sold mens. Then my foot slid into the perfect pair and I could smell and feel the stiffness of the new leather.  I was not in possession of my very own pair of black combat boots!  The driver on the truck laughed as he was taking my money, ‘What are you going to do with them? Women don’t wear combat boots!’ I replied, “Didn’t matter. Someday I’m going to have kids, and if they ever get teased that their mother wears combat boots, they’ll be able to say, ‘Yeah, actually she does. What’s it to ya?'”

But before my tour ended on Oki, women Marines were officially issued men’s utilities and COMBAT BOOTS.  I already my pair spit-shined and ready to go and when I left Oki, I actually owned TWO pair!  The prized pair I bought for my future child, and the pair I was issued.

I actually wore that precious first pair when I attended the Staff Academy at Quantico in 1992.  But while going through the obstacle course I fell off the logs while trying to jump to the monkey bars falling directly on my left foot.  ‘CRACK’ my left ankle hit the ground.  The instructors threw me in the back of a pickup truck and hauled me off to the Quantico Clinic ER where the corpsman came at me with leather cutters to get the boot off! “STOP! Don’t you dare! These boots are my kid’s inheritance! You’re not cutting!”  (I think I must have outranked him. He stopped.)  But the boot had to come off, and he finally agreed to cut the laces instead.  Dah!

(I later learned the boot actually kept the bone from shifting so I didn’t need it pinned.) 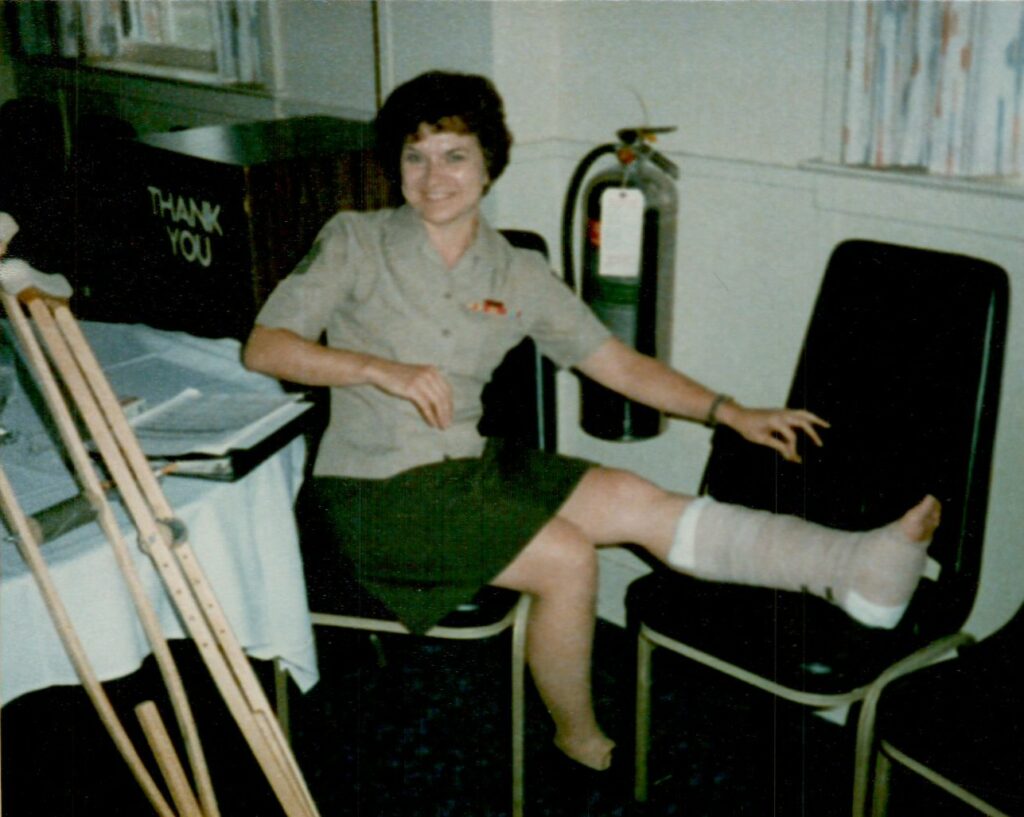 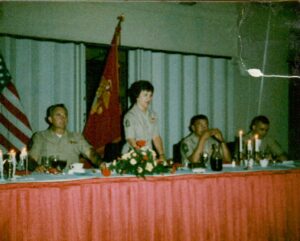 Once the foot was wrapped, the clinic wanted to send me to Bethesda Naval Hospital for casting.  No way! I wasn’t going.  Our Mess Night was scheduled for that night and I was President! I wasn’t about to give up that honor if I didn’t get back in time.  This Gunny wasn’t giving up.  How many chances did women Marines get to be the President of Mess Nights back in the early 90’s?  And so, I was bandaged and drugged with pain killers and promised to go to Ft. Lee Army Depot when I got home to get the cast put on. The Academy would be over at the end of the week.  I could live until then.  I attended my Staff Academy Mess Night as planned and the graduation two days later. 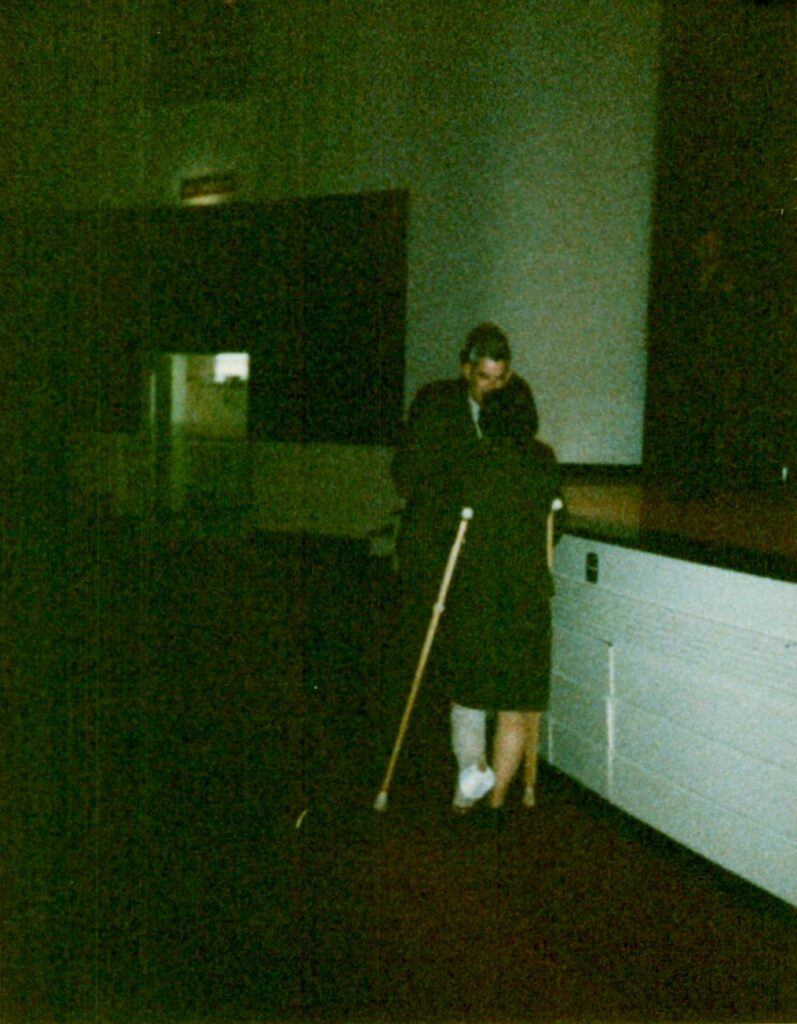 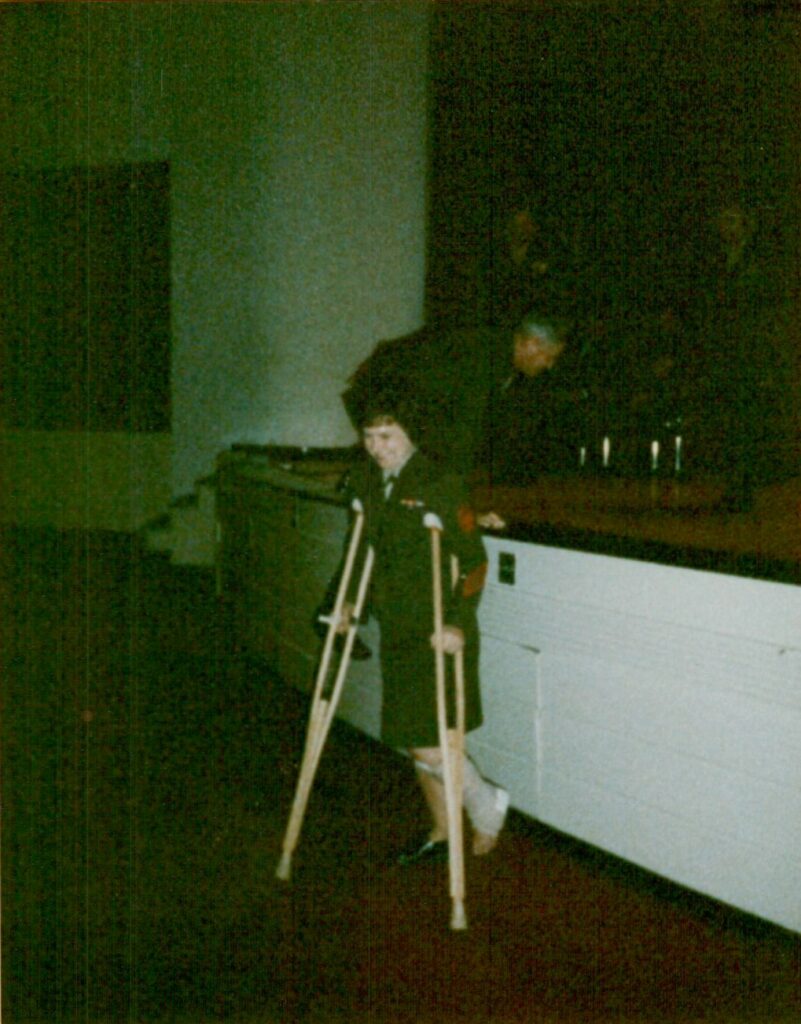 Since the Staff Academy staff didn’t think I should try to climb the stairs to the stage, Major General G. R. Omrod, USMCR,  jumped down to present my diploma.

The Evolution of Combat Boots

Eventually all Marines were issued the tan suede desert boots, with a few other styles in between. I have them all! But only one pair was present at my retirement ceremony on 31 October 2003.  The laces had been replaced in the old black boots, bought off the back of the supply truck in Okinawa in 1978, and now they were trimmed with red and gold ribbons.  I presented those boots to my first-born, 23 year old son, Phillip J. Dietrich and advised him:  “If anybody ever teases you by saying, ‘Your mother wears combat boots,’ you can proudly answer back, ‘Damn right she does!  And she can kick your ass!” 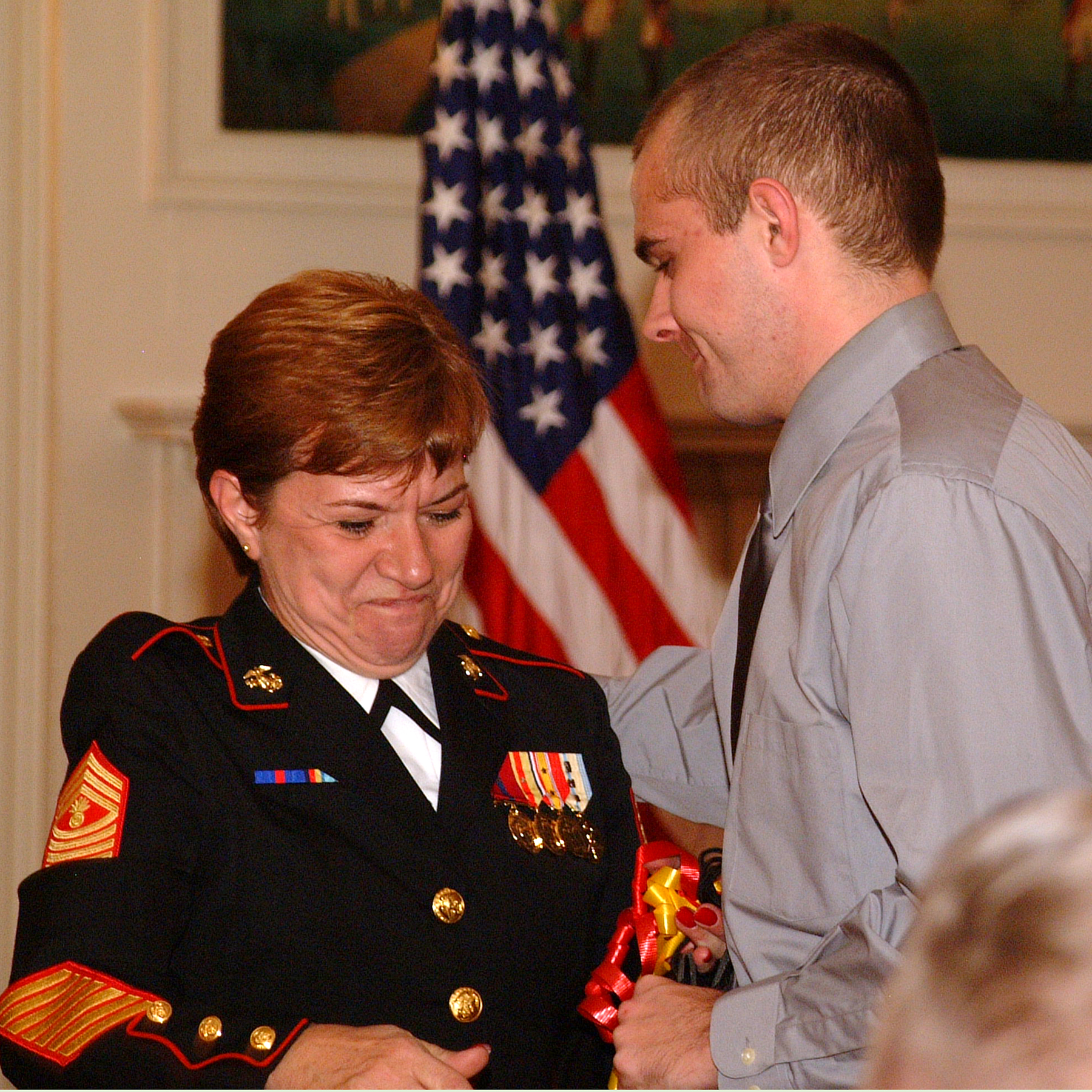 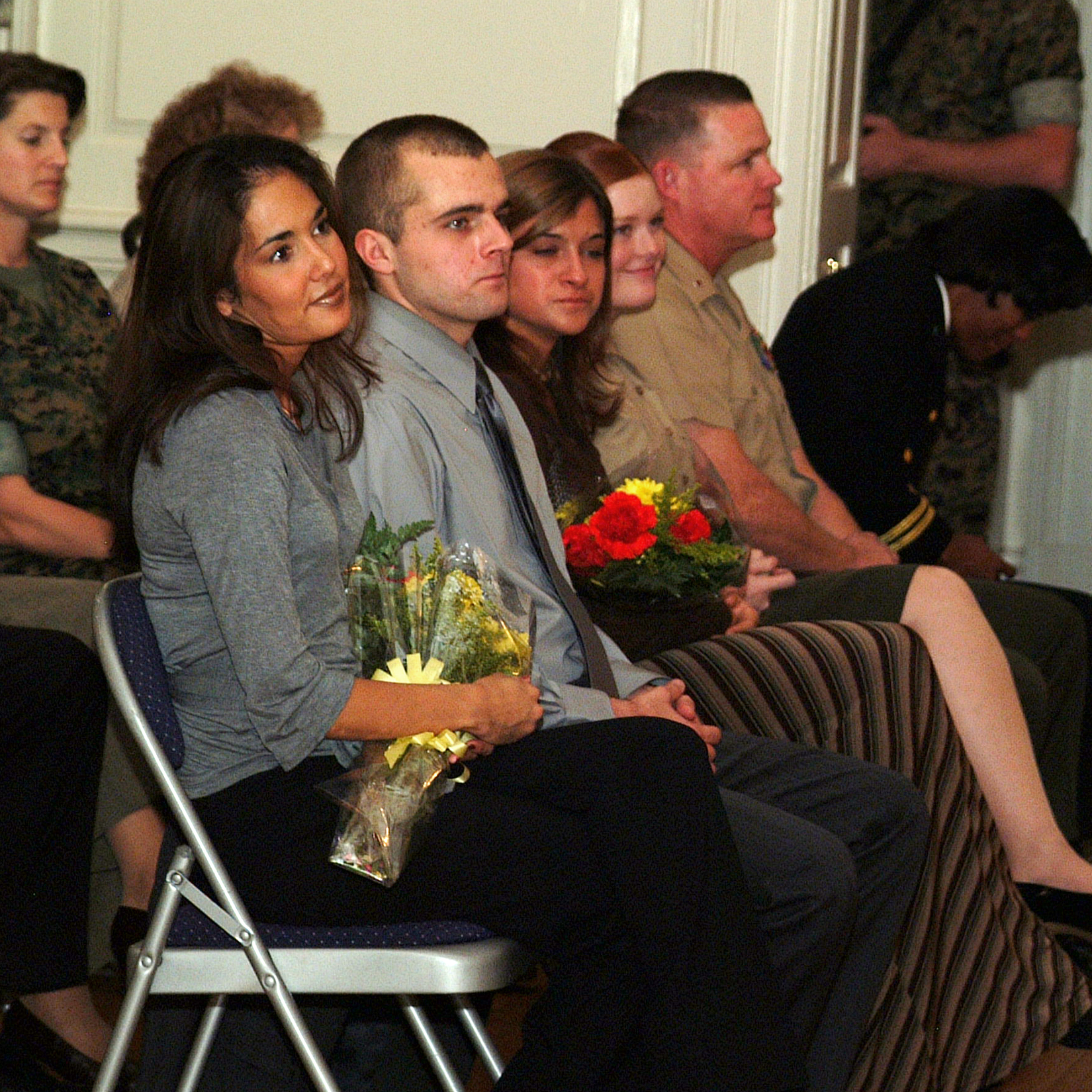 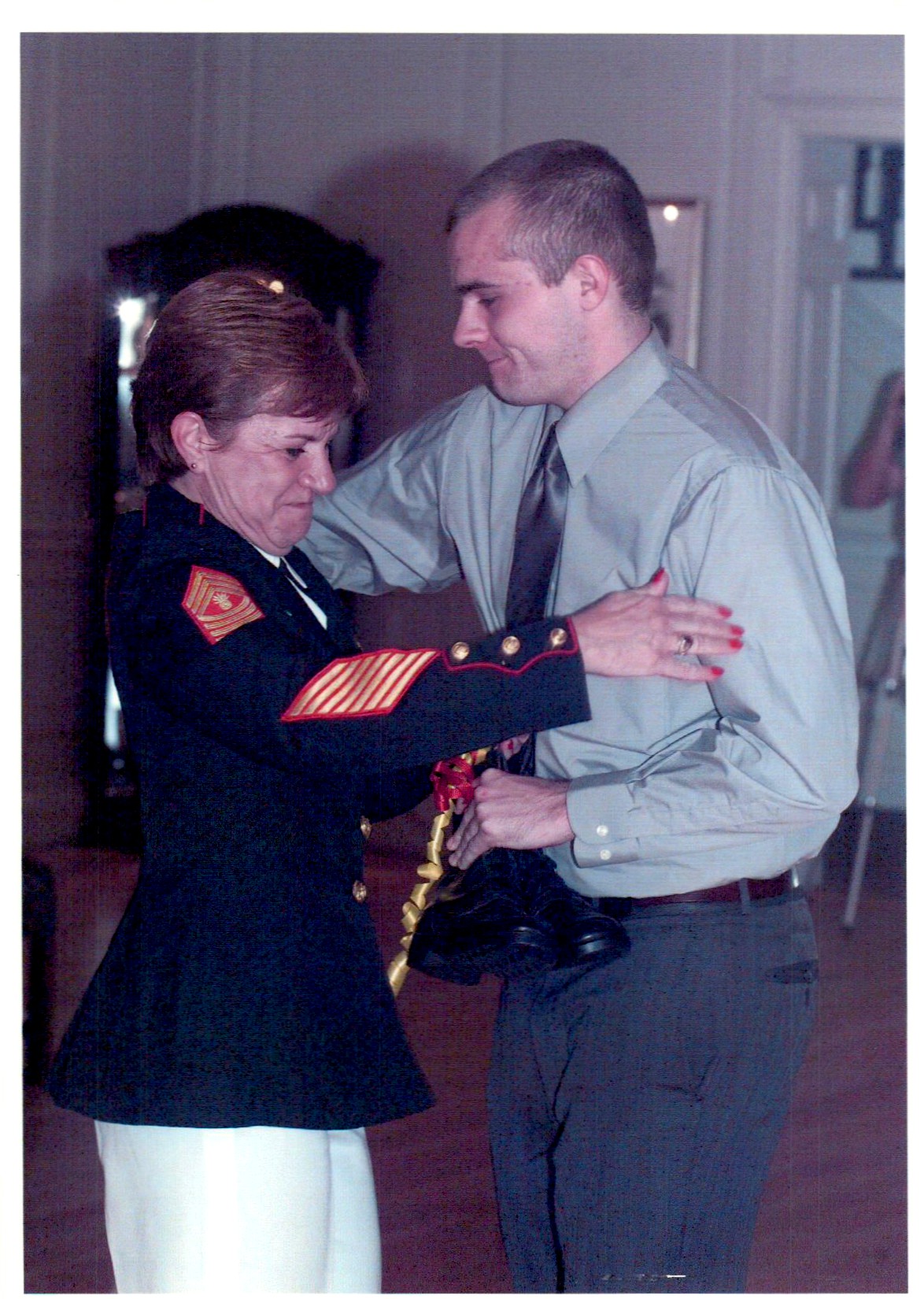 P.S.  My Daughter wondered why ‘HE’ got the boots!  “First Born, First Boots” I explained. But there have been plenty more pairs since then!  She can have her pick!

(After you’ve read my story, PLEASE leave a comment and tell me about your first pair of Combat Boots!)