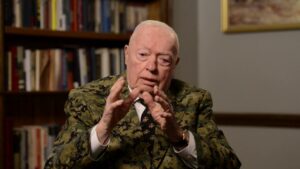 On Tuesday, 13 August 2019, I had the honor of meeting the legendary General Al Gray, Special Guest Speaker at this month’s meeting of the  Houston-Holicky-Sitter Veterans’ Luncheon in Henrico, Virginia. General Gray is our 29thCommandant.  He stands out as the renegade warrior Commandant, wearing utilities in his official Marine Corps portrait. He is still wearing  ‘cammies’ designed into a suit jacket, with a Marine Corps tie.

General Gray spoke to a packed house of active duty, retired, and veterans from all branches. He talked about our current Commandant General David H. Berger’s vision for the Marine Corps, the importance of technology for the modern Marine, and answered questions about his career. One question asked by an active duty Marine for Fort Lee, “What did the General think was the most important leadership aspect.” General Gray’s answer, ‘Taking care of your troops!

His biography, “AL GRAY, MARINE” is being written by Scott Laidig.  Volume 1 (1950-1967) and Volume 2 (1968-1975) were available for purchase at the luncheon. Scott is now working on Volume 3.  General Gray met with each veteran who purchased a copy of the book and personalized it with a handwritten note and autograph.  All proceeds from sales go to the Injured Marine Semper Fi Fund, a 501 ©(3) nonprofit set up to provide immediate financial assistance and lifetime support for injured and critically ill post-9/11 service members from all branches of the U.S. Armed Forces and their families.

The Houston-Holicky-Sitter Veterans’ Luncheon is an informal forum for veterans of all branches of the armed forces. Col. Joseph J. Holicky, Jr. (USMC, ret.) and Congressional Medal of Honor recipient Col. Carl L. Sitter (USMC, ret.) began having lunch together in the mid-1970s following their retirements. Over the years, other veterans and local active duty Marines joined them for lunch. In the early 1980’s Lt. Col. L.W. “Chip” Houston (USMCR, ret.) became part of the leadership team and served as its Master of Ceremonies for over 25 years. Today nearly 100 veterans meet each month to carry on the HHS tradition and to hear prominent guest speakers address military history, national security issues, and other topics of interest to veterans.